People wonder why there is the Xamarin vs React Native comparison and why this issue is so popular nowadays.

Some businesses rely mainly on the mobile experience of their clients. Thus, they need to create high-quality apps for both Android and iOS users. Naturally, when we talk about creating an Android app, we need a developer skilled in Java + Kotlin, and for iOS — Swift or Objective-C will do.

But there is a downside – the average custom software development time grows because of the need to create two apps. Let alone the fact that the Android team and the iOS team might implement the same feature completely differently. For that reason, developers use cross-platform solutions, including Xamarin and React Native.

Cross-platform development tools foresee the opportunity to get native-like applications for several platforms that use the same codebase. This approach helps speed up the app development process and cut costs. 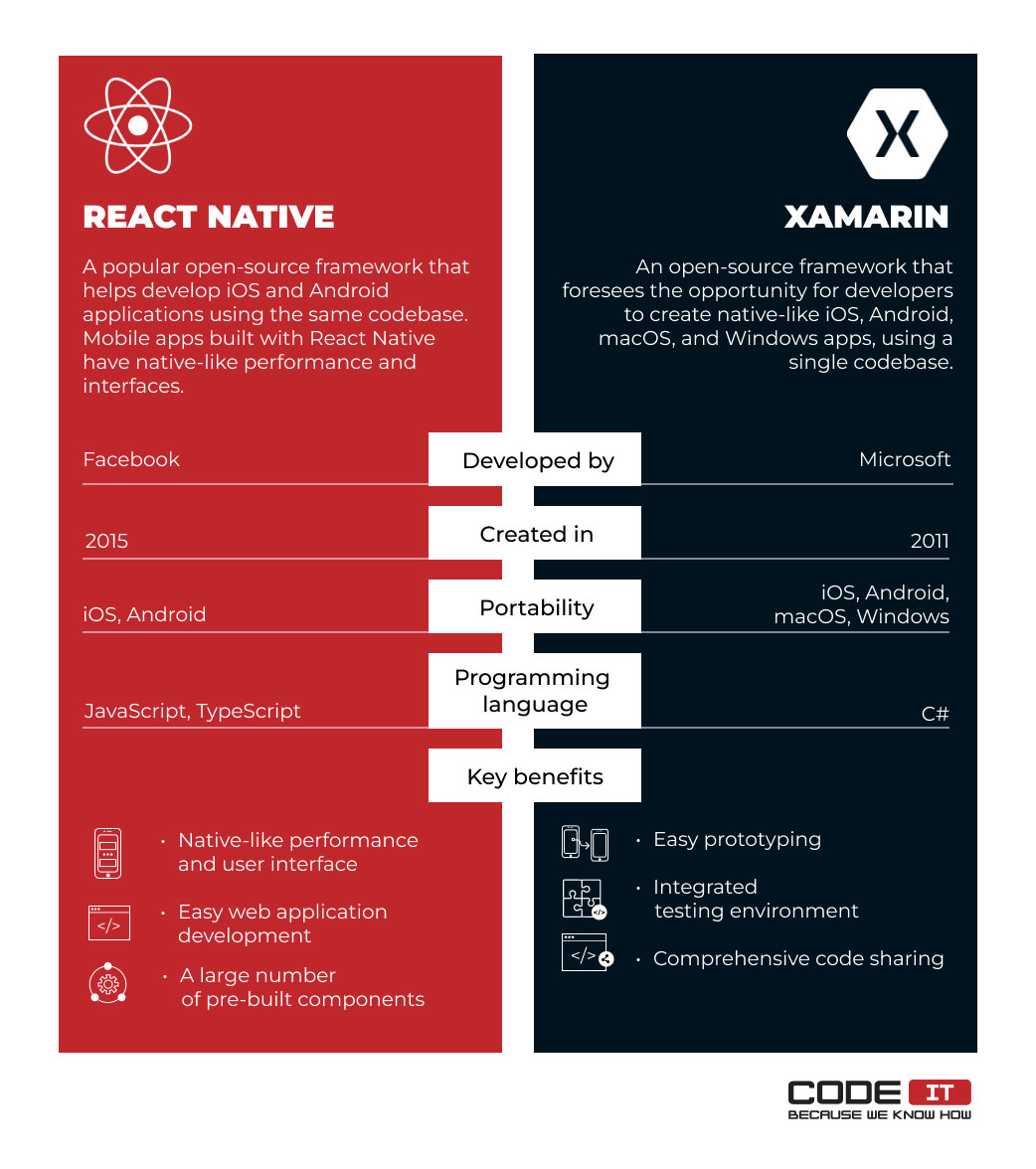 Brief information about each of them:

From the above-mentioned, it is easy to understand that in case your development team has experience with .NET it will be easy to work with Xamarin. And if JavaScript is nothing new to the team, React Native won't be hard to handle.

Let's begin the Xamarin vs React Native comparison with a detailed analysis of the market share and statistics. According to the research conducted by Statista, 38% of software engineers use React Native. Xamarin is used by 11% of responders. 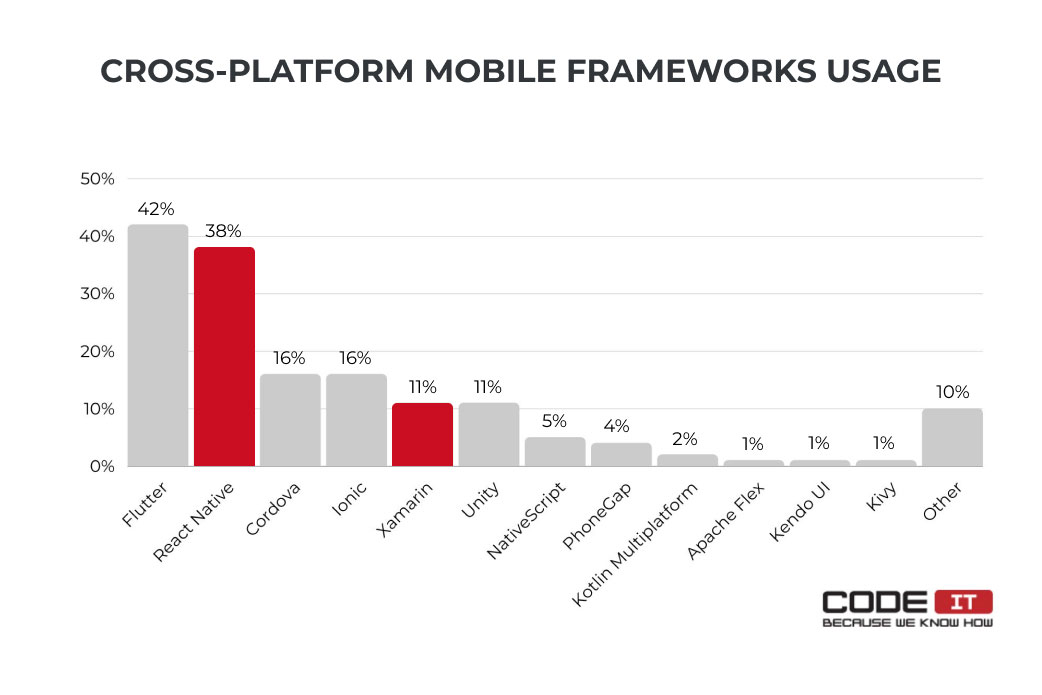 The statistics provided by Stackoverflow Trends show that the number of questions regarding React Native constantly rises on the platform. Oppositely, the popularity of Xamarin falls. 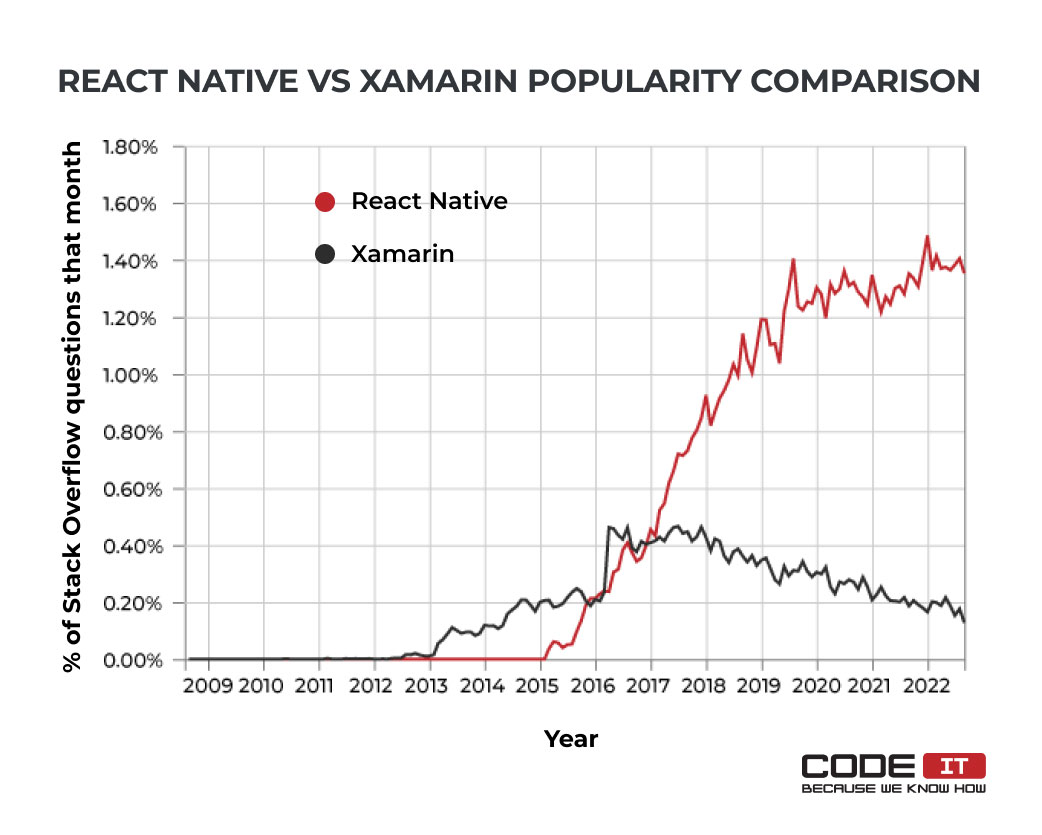 Let's discover why Xamarin has become less popular compared to React Native by exploring the detailed comparison of the frameworks.

It is a framework based on the Microsoft technology stack. With a C#-shared codebase, developers can use Xamarin tools to write native Android, iOS, and Windows apps with native user interfaces and share code across multiple platforms, including Windows and macOS. Forrester's research found that Xamarin reduces mobile app development and life-cycle management costs while optimizing the utilization of existing developer resources.

LOOKING FOR A TECH PARTNER? WE CAN ASSIST IN DEVELOPING YOUR PRODUCT

The opportunity to build a cross-platform app for iOS and Android forced a lot of companies to choose Xamarin. Applications built with this framework usually have native-like but simple user interfaces. 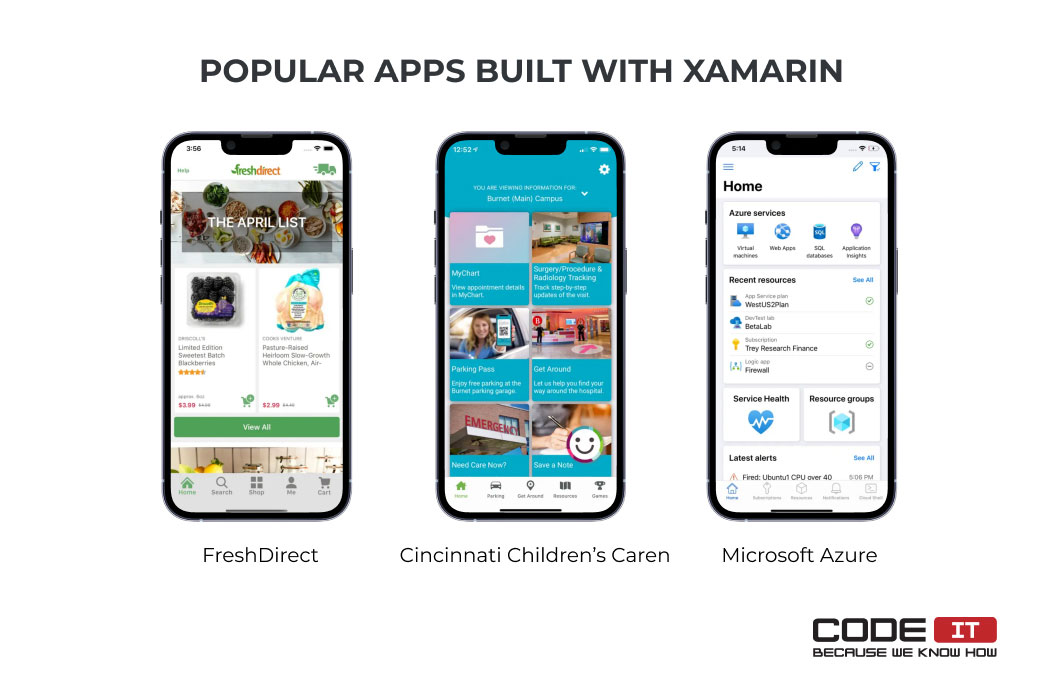 The top apps developed with Xamarin are:

React Native is a JavaScript framework for writing real, natively rendering mobile applications for iOS and Android, launched in 2015. It's based on React, Facebook's JavaScript library for building user interfaces, but instead of targeting the browser, it targets mobile platforms. Unlike Xamarin, React Native creates a UI that is indistinguishable from the native one. Some of the most famous apps, like Facebook, Instagram, and Netflix, were created with the use of React Native. 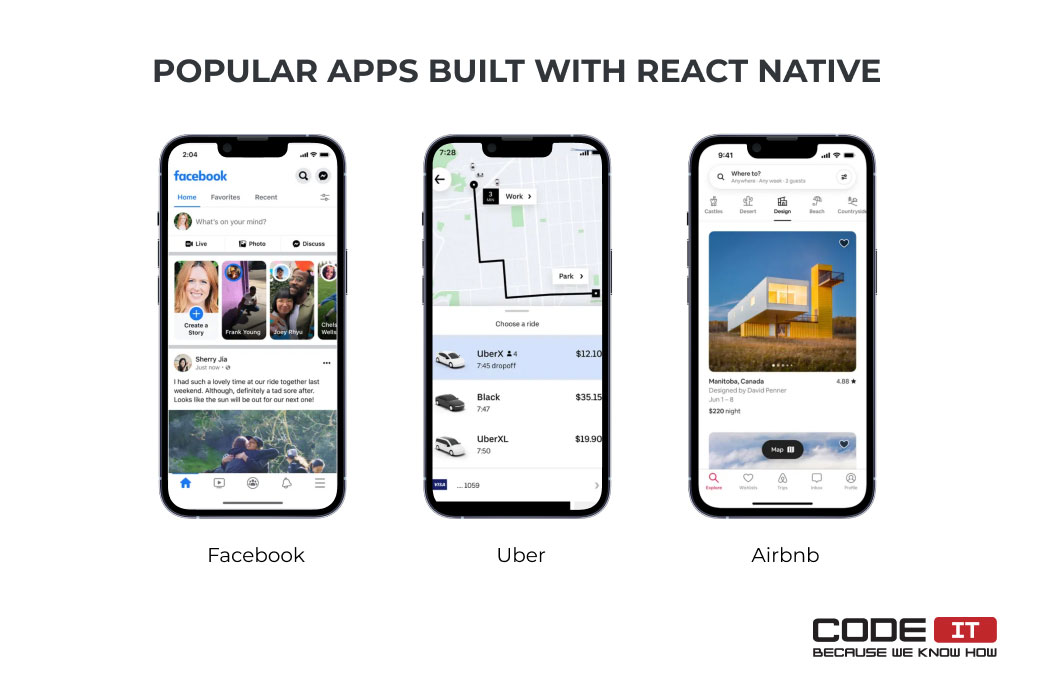 The most popular apps built with React Native are:

According to React Native showcase, the Microsoft company has used the competitor's framework to develop iOS/Android mobile apps for the following products:

Let's take a deeper dive and explore the similarities and differences between the Xamarin and React Native frameworks by checking out the detailed comparison table.

It might be quite challenging to pick the right framework for building a mobile app. In order to choose the right solution, you should define your primary needs and consider the advantages of the compared frameworks. It will help you pick a framework that will help you achieve your goals faster.

Also, we've prepared the use case that will help you understand when you should opt for Xamarin or React Native.

As we can see, there are a lot of similar advantages and disadvantages between the two frameworks. And to be honest, currently, there is no point in spending more time on Xamarin vs React Native debates.

Unfortunately, the existence of Xamarin in 2021-2022 remains a big question. Microsoft company is about to upgrade the framework by merging different toolsets. The popularity of Xamarin keeps falling constantly.

React Native, in turn, remains one of the main multi-platform frameworks and fights with Flutter to be considered the #1 framework for cross-platform app development. The Microsoft company used React Native, a competitor's product, to build five cross-platform mobile applications for their products.

DON'T KNOW WHAT FRAMEWORK TO CHOOSE? OUR EXPERTS WILL HELP YOU!
Is Xamarin better than React Native?

No, React Native is a much more universal and, therefore, more popular framework for developing cross-platform applications. At the same time, Xamarin's popularity declined steadily.

Microsoft has announced that Xamarin's most crucial component — Xamarin.Forms will cease to exist in November 2022. The toolkit will be merged with other tools, so it's challenging to predict its popularity among developers.

What apps are built with Xamarin?

Popular apps built with Xamarin are:

What will replace Xamarin?

Microsoft has already announced that the Xamarin.Form toolkit will be replaced with .NET MAUI. The .NET Multi-platform App UI (MAUI) is a cross-platform framework for building mobile and desktop applications.

Should I use Xamarin or native?

In order to choose the Xamarin or native mobile app development, it's necessary to consider the main similarities and differences between the cross-platform and native development approaches.

The main advantages of the cross-platform development approach is the use of a single codebase to build apps for various platforms. However, cross-platform apps may lack device or OS-specific features. Native-built apps have the best performance and user interface.