Automated testing has become everybody’s key conversation topic due to the great benefits of automation testing in faster bug fixing and reduction of testing time, which translates into big test automation returns.

But what does automated testing mean and why would software engineers need it?

Definition and goals of automation testing

Automation testing involves utilizing technology and tools to test software with the purpose of:


Tests are scripts that are run to check the characteristics of the written code. This stage of development is essential because testing allows running scenarios to see the relevance of produced results.


That’s precisely what you get: In case the results are not aligned with coders’ expectations, it flags the problem. Being automated, such tests can run through hundreds of test cases and scenarios in a matter of seconds.


Hence, writing a test for a code is the most reliable way:

The difference between automation testing and manual testing

Mostly, development teams heavily rely on manual testing when test cases are executed by testers carefully following predefined instructions. Then the results of testing are recorded and compared to the expected behavior.

Each time the source code changes, manual tests are repeated, which inevitably leads to errors and makes them difficult to execute on more than one platform.

Due to the fact that nowadays a majority of development projects are highly complex and time-dependent, manual testing runs short of delivering the necessary solutions.

Under such terms, the benefits of automation testing over manual testing become obvious, especially in areas where the speed of project execution is crucial (for instance, in delivering mobile development services).

In spite of the complexity and sometimes overwhelming experience associated with a switch from manual to automated software testing, the benefits of doing so are numerous. 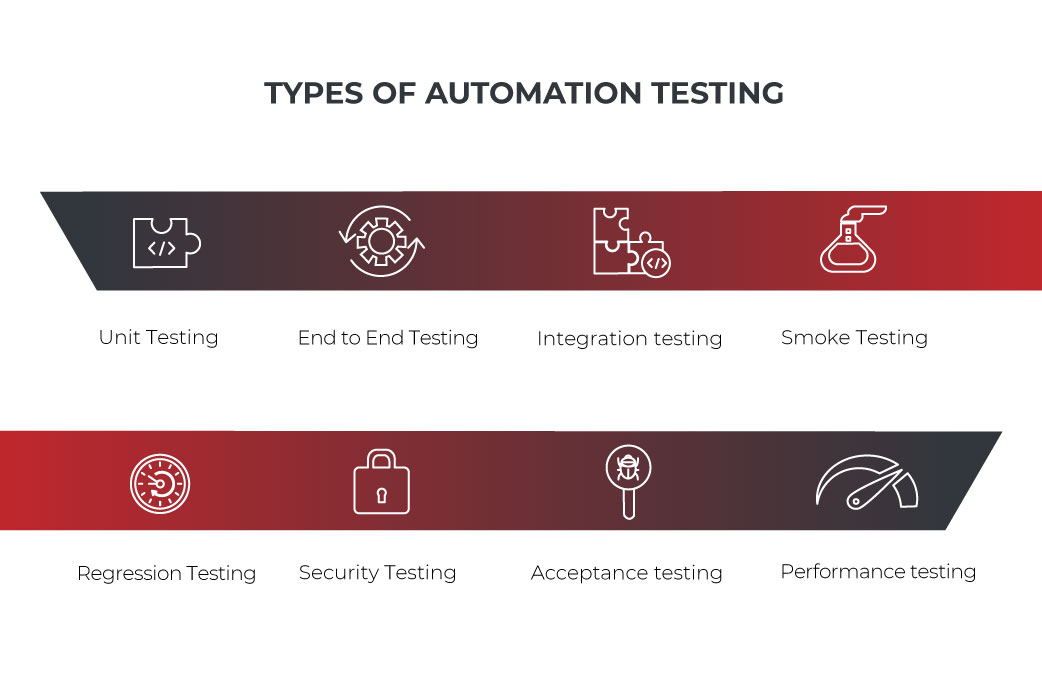 Not to use the term ‘testing’ too generically, it’s worth differentiating several test case design automation types as they reflect on the benefits of test automation framework.

It implies a test for one isolated code component (a utility function, a class, etc.) for the purpose of ensuring the quality of coding and accuracy of its functionality.

How it works: It is possible to write a separate program for testing the unit, utilizing every piece of data that the code might encounter during normal use.

This type of testing is aimed at verifying a bigger part of the product’s functionality. Usually, the cost of such tests automation is quite high as it implies a full simulation of a user journey through an application. However, making this type of test automotive greatly benefits the development process in terms of quick and reliable validation of the system.

How it works: It checks the application as a whole. It can recreate the interactions that end-users could have with the mobile or web app, which means testing for the flow of features.

It refers to testing two or more units in integration to check their functioning and compatibility. While the integration testing is performed, the programmers can leverage tests in developing new features and keep code modifications under control.

How it works: In integration test cases, automation runs tests in parallel, which considerably reduces the total testing time.

Regression Testing is an iterative process, which is determined by the very nature of this type of testing. Regression testing is performed in order to check if the application is functioning correctly after making any changes. Since changes can be made constantly during the development stage, including based on the results of other types of testing, Regression Testing is a mandatory repeatable process.

One of the most important types of testing due to the role cybersecurity plays in the modern world. Security Testing is aimed at checking all the protective mechanisms of the system for possible hacking and to make sure that the system's protection is working to its maximum.

One of the last types of testing before the product is released to the market. Acceptance Testing is done to imagine how end users will accept a product, system, or application when it is released to the market. The end-user checks the product in accordance with the Acceptance Criteria. The goal is to understand whether the final product corresponds to the business flow that was conceived or not.

One of the most important and mandatory types of testing. Performance testing is carried out in order to check how an application or system will work in real market conditions and under heavy load. At this stage, the two most important indicators are the stability of the application and its responsiveness. QA specialists must ensure that even under heavy load, the system will be able to deliver value to users consistently. 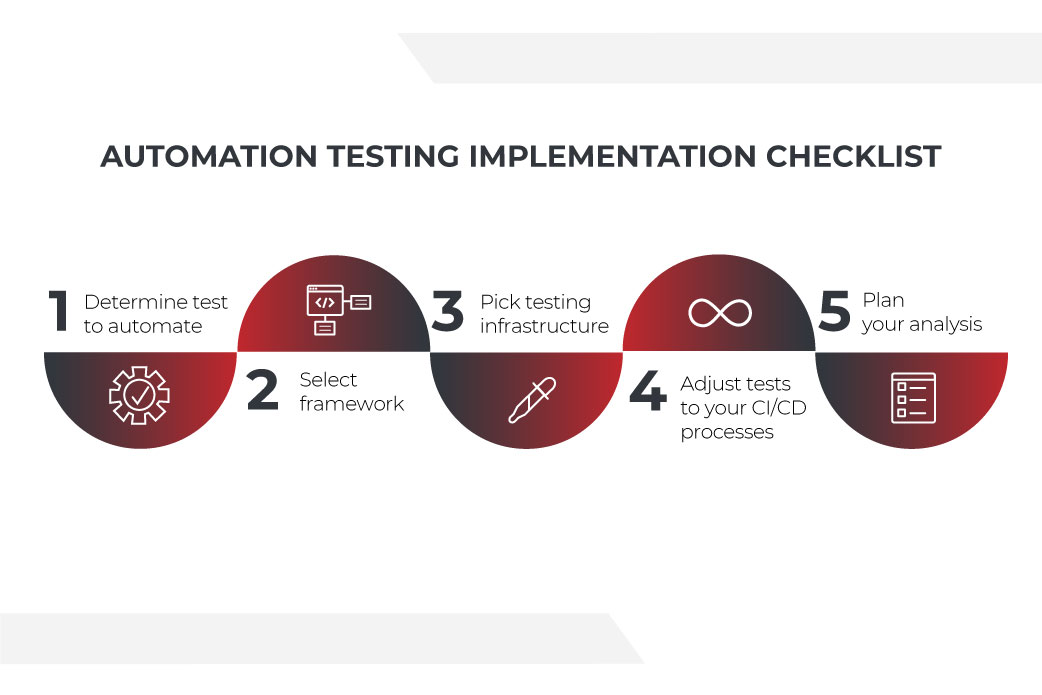 Taking these steps will let you build an unbroken workflow and see the grand advantages of applying automation test framework best practices in the long run. 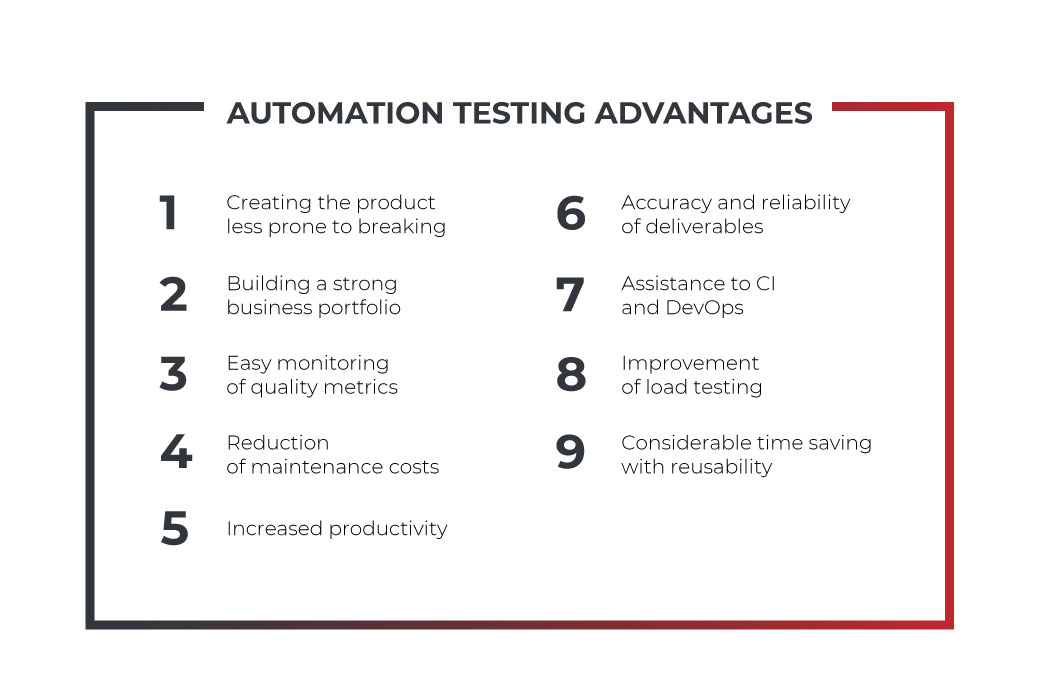 Not to pay extra for fixing the bugs, it is essential that the development issues are addressed at the stage of testing, and bringing automation comes as the best solution since the benefits of automation tools in development are multiple and, in particular, include:

The implementation of automated testing enables developers to create a product that is not prone to breaking. The stable operation of the application in modern conditions is one of the key factors in attracting new users and retaining existing ones. Any system failures and hiccups will invariably lead to a churn of users to competitors.

Automation best practices empower developers with feeling confident when it comes to the compliance of the product functionality with the customer requirements. Automated tests allow you to create better and more stable products that you can truly be proud of and that will take their rightful place in your company's portfolio.

The automated testing extensions and tools can be configured to measure a number of code quality metrics, including code coverage, code semantics, technical debt, and readability to provide developers and managers with valuable insights into more effective project management.

In case you aim at creating and further maintaining the product, testing plays a crucial role in the development as it implies a reduction of costs associated with service. There are situations in which product maintenance is not a separate stage in the development cycle. However, more often than not, maintenance is a key post-development phase, and it often remains either with the development company or its client. In both cases, a large number of errors and problems can seriously damage a company's reputation and shorten the entire product lifecycle. Automated tests allow you to insure against the maximum number of future problems and reduce maintenance risks.

AUTOMATED TESTS ARE A KEY COMPONENT OF THE TEST DRIVEN DEVELOPMENT

Automation brings an overall increase in business productivity as it contributes to lessening the burden on manual QA engineers and establishing a developer-focused environment. It makes a positive impact on the testing as a considerable segment of the development, thus, accelerating the work process in general.

Accuracy and reliability of deliverables

With the implementation of automated testing, developers can re-execute tests on multiple platforms and verify that the tests run as expected on every server, thus eliminating the possibility of a configuration issue.

Assistance to CI and DevOps

Test automation is at the heart of CI and DevOps systems. A Continuous Integration setup or a DevOps operation is unlikely to function without automated tests. Code commits are automatically tested and the results are reported back to the developers whose priority is to fix any tests that break the build so that the mainline code always works.

Since automated testing makes it possible to run thousands of tests at the same time, it lets optimize the test speed and take an agile approach to load testing too. Developers can receive real-time feedback on load tests, as well as analyze bottlenecks or issues in development projects they are tasked with, so they can fix them ahead of time.

Though it takes a great deal of time and effort to set up automated testing cases, once you've automated them, you can reuse them again. It reduces the test execution cycle. In addition to being more cost-effective and less error-prone, automated tests require less labor and time than manual tests. However, everything here depends on the specific case. There are scenarios that are either not possible to automate at all or spending on automation is not justified.

Although automation testing is a great development facilitator, there are several disadvantages of its application in development that you should consider.


However complicated the automation stage is initially, Implementing automated testing and creating a flow of automation testing unlocks multiple advantages of testing software that bring businesses a higher profitability and help construct solid foundations in development.

The benefits of automation testing result from unionizing technology and tools for achieving the goal of reduced testing time and increased development efficiency with a guarantee. When you automate your testing process, you save time, money and resources while also delivering better quality products and, subsequently,  generating more revenue. To conclude, the observed trends fill with confidence in regard to linking the future of software testing to further implementation of automation best practices in software testing and their integrated role in custom software development services.

NEED HELP IN AUTOMATION TESTING?
Which software is used for testing automation?

There are many test automation solutions on the market, but the most popular of all are undoubtedly Selenium 4, Silk Test, Test Partner, Robotium, and Cypress.

What is automation testing?

Test automation is the process of using software tools to automate manual human-driven processes that are part of the overall testing process for an application or any other product. Automated testing can significantly speed up the testing process and ultimately deliver a better product.

What are the benefits of automation testing?

Automated testing has many business benefits. Smart use of automated tests allows you to create a more reliable product that will consistently deliver value under the most unpredictable conditions. In addition, automated tests can significantly reduce the risk of critical issues in the future, thereby lowering the cost of the application maintenance phase. Finally, automated tests are an integral part of the DevOps methodology, allowing for Continuous Integration and Continuous Delivery.