What Is Test-Driven Development In Software Engineering

Answering the question ‘What is TDD?’, we should start with highlighting the popularity of the idea of test-first development.

Test-first development as the concept prioritizing the importance of unit testing became so widely implemented in software engineering that people referred to it as test-driven design once they realized how it can impact the design of the code.

Indeed, test-driven development ideally builds in the software development life cycle, and when developers use TDD to their advantage, they experience a mindset shift that inspires and helps create a smooth workflow.

According to a Janzen and Saiedian survey conducted in 2008, in comparison with the traditional approach, TDD implying the creation of smaller modules enables developers to achieve less complexity in development and increase the ease of code maintainability. 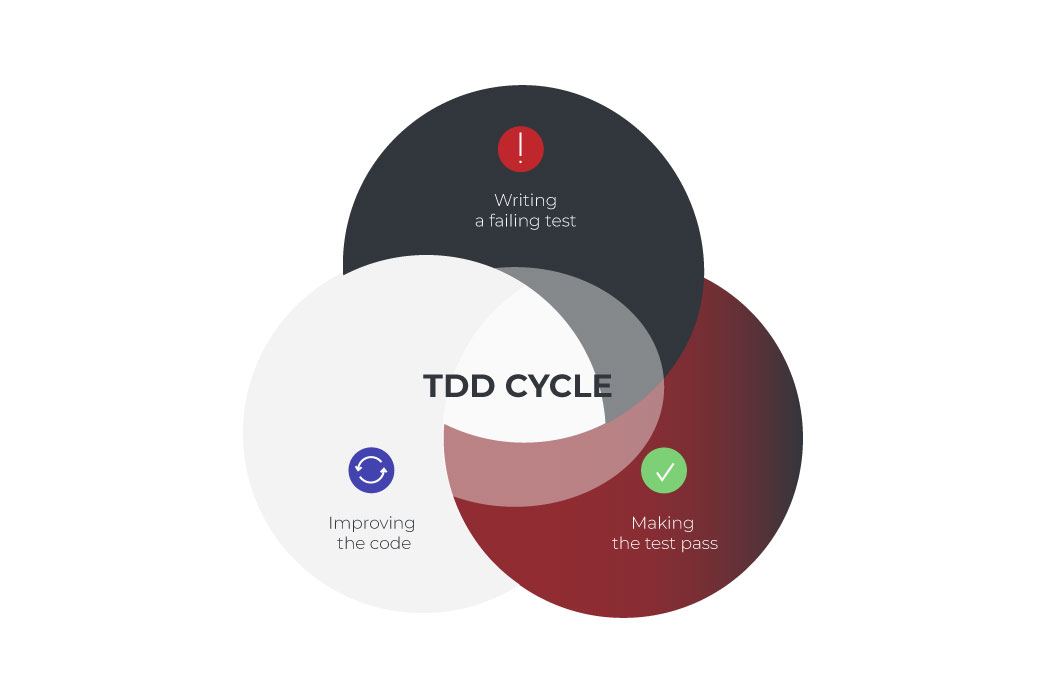 Primarily, taking a test-driven development approach means that development is conducted entirely through tests, one test at a time, and active usage of refactoring, which now takes less time.

In other words, the initial implementation of the working code is usually intentionally simplified while the final code design is based on the emergence of new tests and obtained consistently on running tests and refactoring codes.

Hence, it is also referred to as red-green-refactor technique where red stands for writing a test, and green denotes creating a code that will pass the test that is followed by another ‘green’ phase of refactoring the working code.

The automated unit test acts as a specification that helps to create a working code. Thus, it is both documentation and proof that the code works the way this documentation requires. In this context, being able to test a code is a big plus for developers and teams, and here's why:

Bottom Line: Proponents of TDD find this practice both liberating and making a positive impact on their productivity.

WANT TO IMPLEMENT OUR EXPERIENCE IN APPLYING A TEST DRIVEN APPROACH?

The emergence of TDD techniques roots in the wide implementation of Agile methodology of software development with its concept of rapid adoption to changes.

While the traditional coding process starts with the actual coding followed by testing, test-driven technique implies that a developer takes a 'reverse' approach, which means:

In the process, developers take the following five steps: 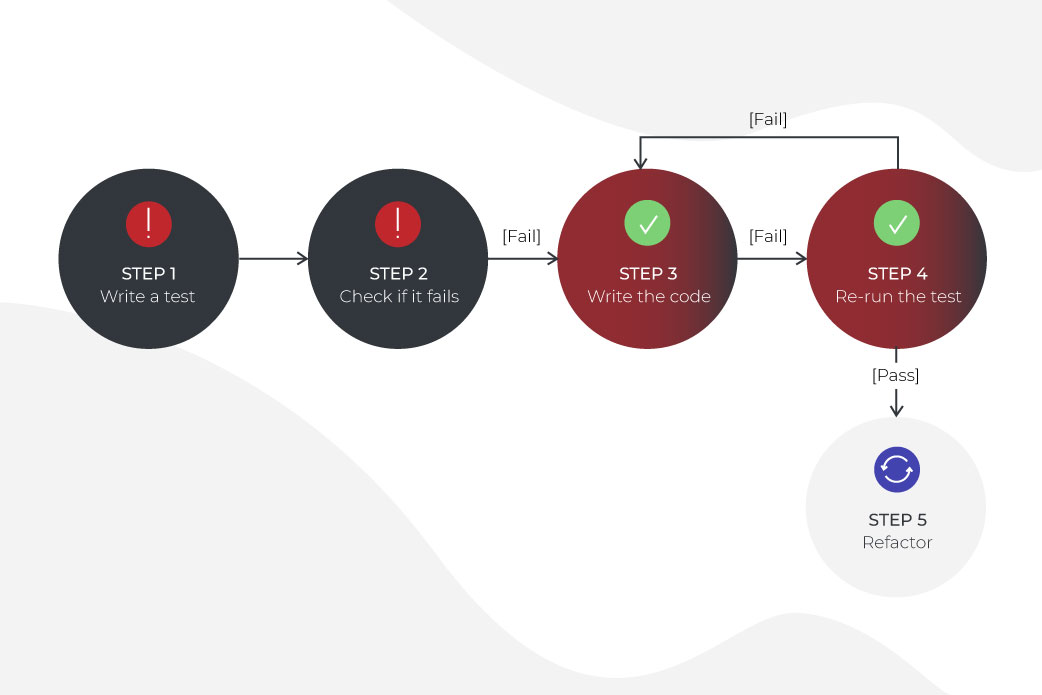 Every round of TDD is repeated automatically to ensure that all the features are covered.

Bottom Line: To make sure that tests pass, a developer writes a unit test code, and after the initial fail, there comes a stage of running the various tests followed by refactoring the code and making it efficient. As a result, TDD can be used to add new features and refactor or upgrade the design without fear of doubt. The implementation of these steps also reduces debugging time by enabling developers to spend less time on identifying the causes of errors.

However, although the steps to adopt TDD and create a flow of automation testing seem easy to follow, there are some mistakes and challenges that developers should be aware of, and that we discuss below.

Mistakes You Need To Avoid In TDD

One of the mistakes in adopting TDD was pointed out as ‘fanatical TDD experience’ that results in overcomplicating the development and slowing it down rather than bringing the desired level of automation.

Indeed, developers often go to the extreme and start to pay too much attention to generating tests, which makes no sense from the practical or financial point of view. In doing so, developers are adding more and more tests to the system that leads to making it too complex and costly.

Also, developers might start with a set of unit tests for a new class prior to writing the class itself. Consequently, they spend considerable time making these tests work. It creates the overload when developers have to debug the working code and the tests, and any change in structure forces them to engage in tedious and time consuming code-rewriting tasks.

In practicality, it leads to misuse of TDD.

How To Avoid The Mistakes In TDD

Luckily, this kind of mistake is easy to avoid. With TDD, a developer should minimize the size of the ‘work context’. This applies to both the test and the working code. Hence, the recommended strategy breaks down to taking an itemized approach and writing a short test followed by writing a small piece of working code. 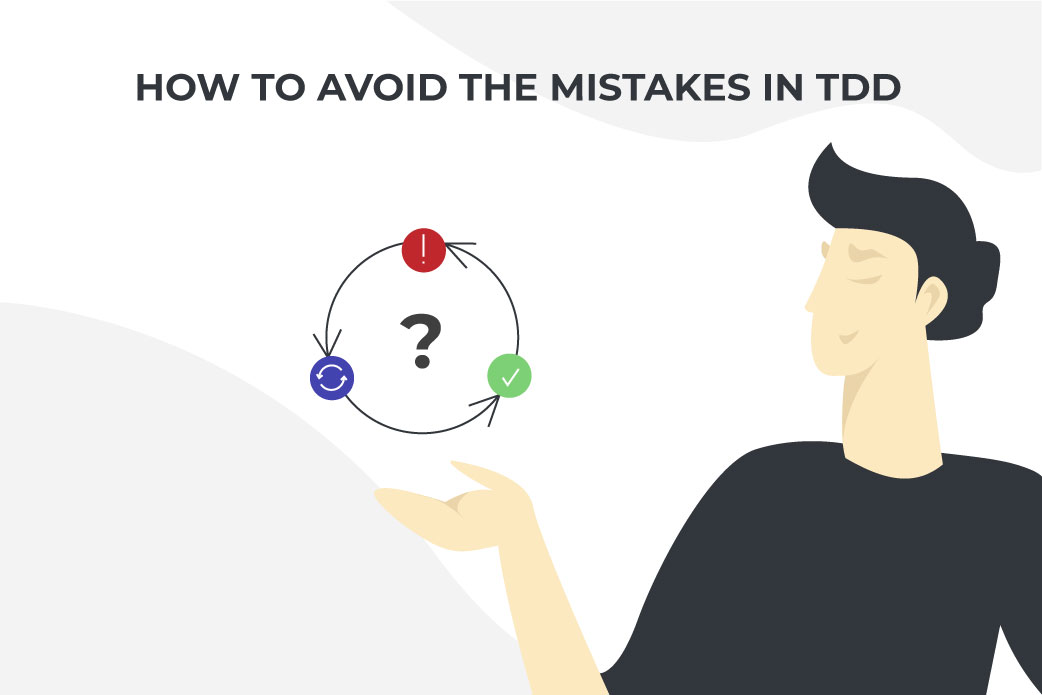 Shortening the gaps between runs of tests appears a solution as it allows you to check the written code instantly without losing the overview, that is, capturing all the details of the code that was changed.

Some developers get frustrated with the occasional drop of speed associated with taking the TDD approach and write code without tests. But with practice, the process starts moving faster, and it increases developers’ confidence. Ideally, to avoid mistakes in adopting TDD at the initial stage of implementation, developers are not to be limited by tight deadlines.

The fact that there can be a drop in speed must not be a discouragement. Once developers have mastered advanced testing techniques, they will not only get back their speed but increase it multifold, and tools we list below can be helpful for accelerating the TDD adoption.

Tools Used For Adopting The TDD

When you hear people blaming TDD for slowing down the development, it's because they don't realize that TDD is just a method, not the end goal. As with all powerful techniques, test driven development is easy to learn but when used improperly, it can do a lot of damage. To ensure the proper implementation, there are lots of assisting tools.

In particular, unit testing frameworks and tools that support TDD approach include the following:

Implementing automated testing with these tools in TDD leads to the creation of code that is more modular, flexible, and manageable.

TDD presenting test automation best practices in Agile brings a breakthrough when it comes to the increase of project profitability as well as overall business productivity gain.

What benefits Agile teams get

Overall, teams practicing the TDD approach note that the considerable increase of productivity comes from the immediate observation of failures at early stages of project performance. 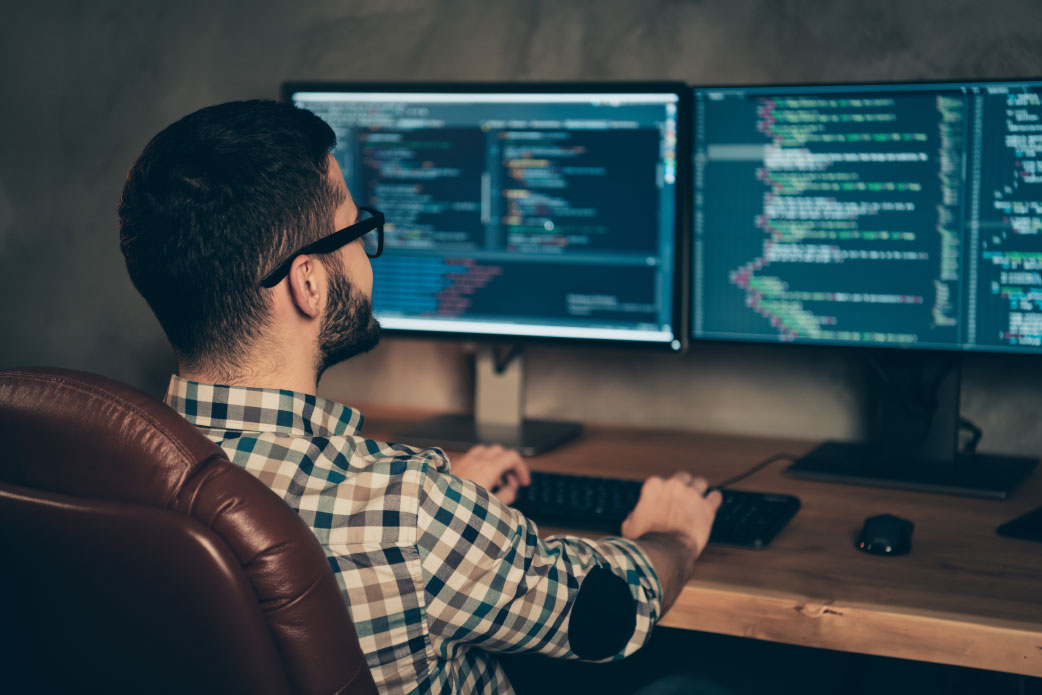 BDD methodology standing for behavior-driven development is often presented in opposition to the TDD approach. Below, we note facts worthy of consideration when choosing a strategy that is more fitting for your project.

Initially, the introduced approach implies creating certain behavioral specifications that describe the behavior of the designed software written in a language which is not code but precise standard English.

It means that behavior-driven development includes writing a scenario based on the expected behavior of the design in the form visible to the end user.

In fact, BDD appeared as an extension rather than an alternative to the TDD approach.

However similar TDD and BDD may seem in essence, these two approaches are intended for different purposes and the tools that can be used to implement them also differ much.

In a nutshell, TDD is intended as the technique for checking functions while the primary focus in BDD is checking of user scenarios.

THESE AREN'T ALL OF OUR MATERIALS FROM THE SOFTWARE TESTING FIELD. CHECK THIS OUT:

While a traditional sequence dictates that the design is first produced and then tested, the test-driven development methodology offers a different sequence proving to bring high quality results with a guarantee because unit testing prior to writing a working code ensures the prevention of coding failure and, thus, secures a role in the future of software testing.

When teams take a test-driven development approach they focus on building a system incrementally that translates into creating functional and deliverable end results.

Therefore, the major advantage of test-code-refactor strategy is achievement of flow in development by enabling the developer to increase the structure of code without affecting its functionality.